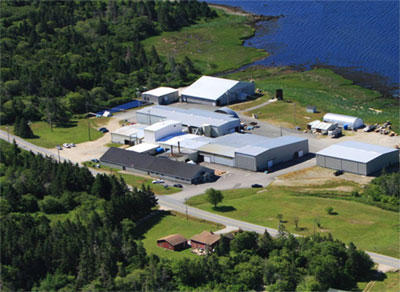 Kenney & Ross Limited was founded in 1945 by Mr. Job Kenney and Mr. Reginald Ross who were two local entrepreneurs. They believed that the province of Nova Scotia possessed a rich source of marine by-products that could be processed for added value. During their early years in business, they manufactured a number of marine products ranging from cod liver oil to pet food to fish gelatin.

In the early 1960’s Robert Norland of Norland Products Inc. in New Jersey, asked them to produce a technical grade fish gelatin. Color television was becoming popular, and the K&R fish gelatin soon became the standard gelatin used in the US and Europe to precision manufacture a metal part inside the color picture tube. This lasted for many years but with changing technologies, the fish gelatin was ultimately replaced. New technologies have occurred since then, and this same gelatin and its special characteristics are now used in the manufacture of solar panels for generating electrical energy.

In 1990, K&R began producing kosher, a pharmaceutical grade, fish gelatin for a major vitamin and supplement company. K&R remains their sole source of supply even after 20 years. The most recent pharmaceutical application for our gelatin is in the manufacture of quick dissolving tablets for prescription drugs.

In the mid 2000’s, K&R began producing their Hydrolyzed Fish Collagen. Our continued improvements make the collagen well received by companies world-wide. K&R is one of the few companies that only manufacture marine gelatin and collagen having no possible contact with bovine or porcine products. This prevents any possibility of BSE or cross contamination. In addition, the K&R products are also able to be certified as Halal and Kosher by strict agencies.

The Fish Gelatin and Collagen are manufactured from the skins of wild, deep-sea fish harvested from the North Atlantic Ocean and not scales from the aquaculture grown by farmers in rural areas. This eliminates the possibility of forbidden chemicals or antibiotics being present that may have been used by fish farmers. In addition, no sulphites are used in the production, yet our gelatin and collagen have a light color and very low microbial counts.

In 2015 K&R was acquired by Ajinomoto Trading Co., Inc.  K&R has grown from making technical grade fish gelatin to being a major manufacturer of food and pharmaceutical grade Fish Gelatin and Hydrolyzed Fish Collagen for export throughout the world. Our exacting specifications and uniform output have made us the provider of choice to leading customers.

Our Raw Material Safety Data Sheets provide information on the safety of our products and any of their additives.
Learn More